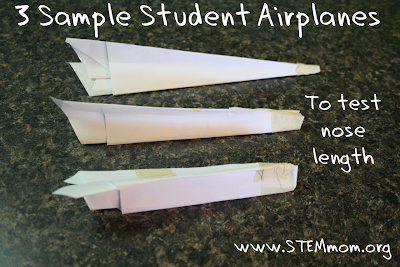 Who doesn't love flying paper airplanes? And as a teacher with few resources, it also fits the budget! Students make three airplanes and construct the planes with one small gradual modification. Then they test how far each plane travels, compare the results, and then determine whether or not their modification did in fact make the plane go further!

This lab has several goals:

I allowed my students to chose any type of airplane model they wanted to do this lab (although I do include the basic direction in the student handout "Best Flying Paper Airplane.") The purpose of the first prelab question is to get students thinking about variations of a paper airplane they could make to get the plane to go further. Many student have ideas such as, add weight to the nose (which is why I suggest having pennies and paperclips on hand), change the size of the nose (like the photo above), change the width of the wings, but there are many other adaptations students may come up with. 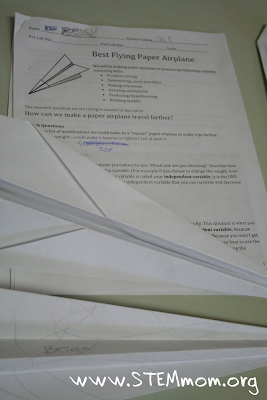 Although this lab is simple in its set up and execution; it provides rich discussion opportunities for you to have with your students. For example a student may want to modify the nose length. At first they may decide to cut the nose shorter to change that variable. Ask the student if he/she thinks the weight change is now being introduced as a variable. It doesn't really matter how they answer, as long as they think about how they're making the changes to the plane and can justify them later after the results of their trials are completed. The key is that students modify for ONE variable. So if they are modifying wing width, they need to be sure their modifications don't inadvertently change something else about the plan. For some student's design, it was better if they just modified the same plane, and for other, it worked better to make three separate planes.


I love data tables, so of course there's one in this lab. I suggest students fly 8 trials for all 3 planes. You should notice that I titled the control trial as "Airplane without modification," but that I left the two experimental airplane column titles incomplete. Students should write in how they modified the plane. Encourage them to measure those differences whenever possible. If they said they were modifying weight, they should weigh the plane, if they are changing the wingspan, they should measure it. 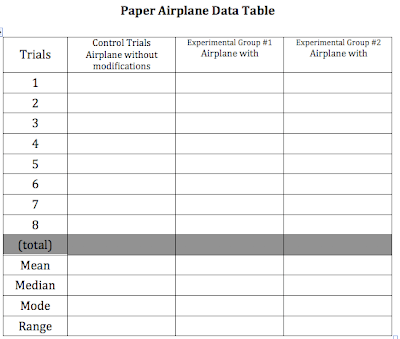 When completing this lab, I was only working with 6 students at a time, so we taped down our tape measure in the hallway. However, it still took a long time for all students time to perform their trials. If you have a class much larger than that, you'll have to make modifications. I suggest either taking students to a large open area like a cafeteria or gymnasium, but measuring might get messy, with lots of students/groups throwing and measuring. Instead you might consider still setting it up in the hall, and having students in small groups go out to run their trials. If you are homeschooling, or are in the informal science arena, you should not have trouble managing this lab with students of varying ages.


Students will calculate mean, median, mode, and range. A full explanation of how to perform each of those calculations is included in the student lab. For postlab question #1, students are to compare the various calculations and to defend which measure of central tendency most accurately describes their data. Most students pick mean, mostly because they know it is the "average," includes all the numbers,  therefore believe it is the best representation. Very few students have exact numbers for within a trial (modes), but it may be a good indicator if a student does have one. The purpose of calculating the range is to best determine whether median is a better number to use compared to mean. If there is a large range, for any one particular group, it indicates either high or low distances, those numbers may be throwing off the data in the set, and skew the mean. I find that for most students, the median is the best measure of central tendency.


So I had a lot of text, for what I believe is a simple lab. I hope this won't scare you off in giving it a try, either with your class full of kids, or with your homeschooling students! Do share your experiences! I love hearing how labs go and how you would modify it next time! Again, here a link to the student handout.