These are the feelings I have after hearing Dr. Jeff Goldstein speak at NSTA (National Science Teachers Association) 2012 here in Indy. Dr. Goldstein is from the National Center for Earth and Space Science. His blog titled Blog on the Universe, is geared to parents, teachers, and kids trying to find ways to make science fun. He is an astrophysicist with authority to speak both as a scientist and an educator. Throughout his presentation, I wondered what he might say about my book, STEM Student Research Handbook. At times I couldn’t wait to talk to him afterward because our beliefs aligned so closely and at other times, I realized that I am part of the problem! This YouTube video is from NSTA 2011, but you'll get the flavor of what he had to say this year at the conference as well. The production is well done, as his words are put into a song. Its inspirational, and true!

As an audience member I was fully engaged by Dr. Jeff Goldstein's discussion of the disconnect between science and science education. I even clapped at one point, and he looked over at me, but I'm not sure whether or not he liked my enthusiasm!) He, like many others who promote a reform of science education, said that students need to DO science. And I whole-heartedly agree. But he hit a nerve when he gave a specific example of how schoolteachers
have allowed hypotheses to ruin creativity. He gave the example of an enthusiastic child whose natural curiosity want to know what’s under the rock, but the teacher won't allow him to lift it until he has a testable hypothesis. He informed the teacher audience (namely me!) that this is not how science really works. He told us to “just let the kid turn over the rock!” Then the kid might get the idea that critters might also be under other similar rocks (a hypothesis). Chapter 4 of my book is dedicated to writing hypotheses--I'm guilty! Dr. Goldstein reminded teachers that scientists are curious first, then organize what they’ve learned into predictions. However, I—like most science educators—never practiced science without the context of how I would teach it. To be honest, I don’t know exactly how the scientific method works in the “real” science world. Instead, I know how science educators “think” science is performed. Again, I’m guilty! 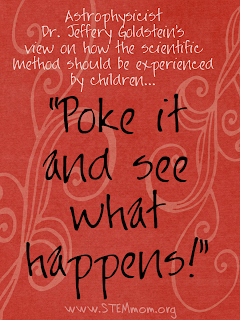 Like my post on “What Inquiry Is Not,” I’m admitting that as a classroom teacher I am part of the problem. I was never a practicing biologist, I only studied the content and did some accompanying labs to reinforce the content. I never DID science to answer a dire question or to uncover some aspect of the world around me that had yet to be "discovered." Therefore, in teaching my students, I focused on content. I’ve worked hard to lose this mentality, but its ingrained in my “teacher being.” The STEM research graphic (shown further down in this post) appears in my book, and although I am always careful not to lead students to believe that science is a step-by-step process, my graphic still probably is guilty of what Dr. Goldstein would say is “ruining” the scientific inquiry process. His advice? “Poke it, and see what happens!”

Dr. Goldstein described the scientific method as an individual process. The same scientist may not approach experiments the same every time, and certainly two scientists working on the same problem won’t approach it in the same way. Its an art, and must be flexible. In theory, I believe this to be true. But as a science teacher trying to foster the scientific thinking processes, and the basics of scientific inquiry (accurate observation, data collection, analysis etc.), its hard enough to keep track of all the projects students do if there is some predictability of what phase of the experiment they are on. 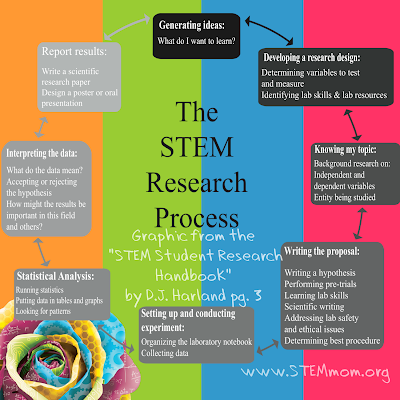 I doubt Dr. Goldstein has ever had to monitor several sections of science research projects at any given moment! Not only am I am herding cats, but these cats have never been allowed outside, they don’t even know how to apply the basic principles of scientific inquiry. I do feel that that students performing research where they are in control of what they learn, the procedures to follow, and the analysis of the data, is still representative of the scientific process and the closest thing they’ll get a true inquiry-level experience at the high school level.

So while I may be guilty of structuring the scientific method more than a true scientist, I am justifying this by saying that I am honing students’ inquiry skills, and teaching them how to dig for accurate and reliable information. Unfortunately, by the time they get to high school, they must be pushed to be curious, but they need a structure in which they can find answers to their curiosity; and THAT I can do!

So I walked away from this NSTA talk feeling like philosophically I am on the right path, but my execution of the ideas may be warped by the teacher view I have of what scientists do! It seems there is a lot wrong with how we do science in the system of school; but what I do know is that we must stop focusing on teaching facts. Dr. Goldstein reinforced for me that the statement, “knowledge is power” is no longer true. Not in the 21st century. Knowledge is everywhere. The power is in providing kids with a skillset of how to use knowledge and the ability to ask the right questions to in order to push the edge of what is already known. And on that front, the astrophysicist and I agree!

[I highly recommend following Dr. Goldstein on Twitter as his 140 characters provoke more thought about science and education than entire essays from others. You may not agree with all of his ideas, but he'll make you think! Follow him @doctorjeff]

I have also found that Dr. Neil Tyson, another astrophysics, has some great ideas on science education. I talk about his ideas in my post titled, "Let Kids Break Stuff." Who knew that astrophysicists are so articulate and interesting to listen to? I guess that goes to show you, you can't stereotype!
Posted by Dr. Harland at Monday, April 02, 2012