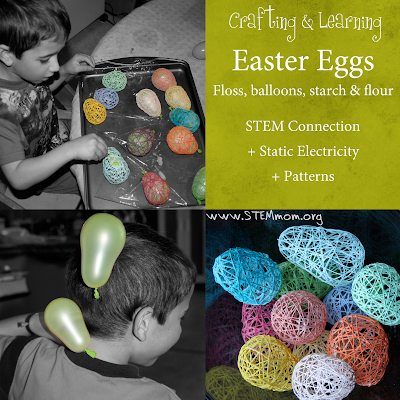 I made these Easter Eggs using Alissa's directions from Crafty Endeavor. I'm leaving the detailed directions and tips up to her, so be sure to see what she has to say. Instead, I'll focus on the STEM connection to make this craft a learning experience for your kids.

Materials you'll need
[Note: my photos were taken before I popped the balloons.] 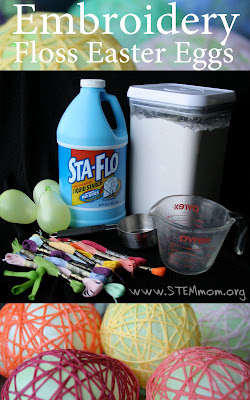 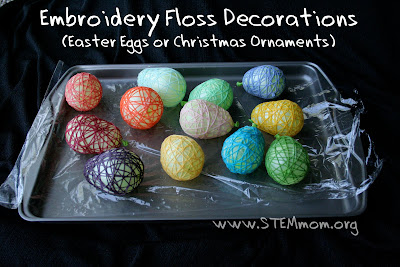 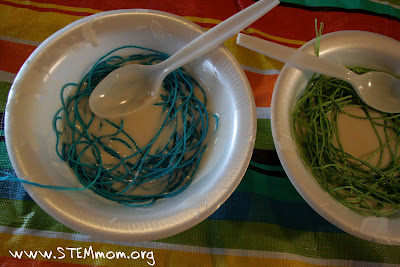 Because this involved balloons, bright colors, and sloppy goo, I thought this would be a great craft to do with my 5 year old. So I prepared the set; poured the goo into two 2 bowls, coiled the string, blew up the balloons, set up the step stool, and got out the craft aprons. However, it was not to be. Although this craft SEEMS to has all the trappings of a good kid craft, it didn't work for us. The string-wrapping process requires more fine motor skills than I first thought. The string is slippery and needs to be wrapped tightly in order to maintain the egg shape. This craft should be great for upper elementary kids, and I can see even middle school and high school age kids enjoying this. But in my opinion, its not one for the wee-little ones! 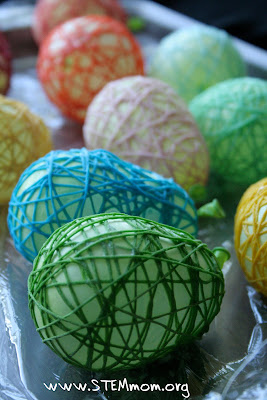 So I couldn't get the kid to make eggs with me, but he LOVED the balloons and figured out himself that they were sticking to his clothes. I gleefully questioned him to see if he could get them to stick on other things! He-he. Therefore, I found another way to engage my son in the process! Let's talk static electricity! 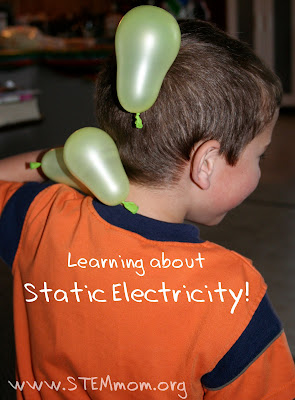 The Science Made Simple Website, describes what static electricity is, and why is has some of the effects that kids notice.

Everything is made of really tiny atoms, and each atom has smaller parts that are positive (protons) and negative (electrons). When you rub the balloon on your hair, some of the negative electrons from the balloon move to your hair. Your hair stands on end because similar charges repel one another, and therefore, each hair tries to "get away" from the hair next to it. Crazy hair standing on end is the result!

Static Electricity is an attraction between two objects with different charges, positive (+) and negative (-). 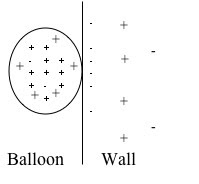 The balloon is now more positively charged and is attracted to the wall which has more negative charges than the balloon.

Objects "prefer" to be neutral, or to have equal number of positive and negative charges. Therefore, when a charge is built up, it will eventually go back to its neutral state, either quickly (like a lightning strike), or gradually (like the balloon eventually falling off the wall).

Another static electricity example kids are familiar with is how we get shocked touching a door knob after walking across the carpet. Electrons from the carpet are transfered to our bodies, making us more negative than positive. Our bodies are "looking" for a place to get rid of the extra electrons. The shock we feel, (and see while shuffling under the covers in the dark) are the electrons transferring from us, onto the other object, like doorknob. 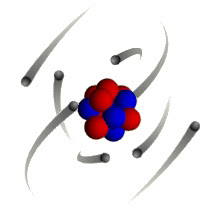 I didn't talk about all of these things with my son, but he does know that "static electricity" is what keeps the balloon on his head and on the wall! 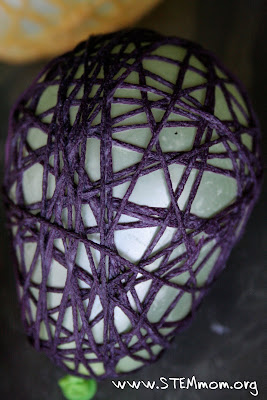 In case static electricity isn't your forte, for older kids I believe asking prompting questions about the patterns that the string makes could turn an otherwise mindless task into an interesting one. I much prefer the eggs whose strings appear to be randomly wrapped around the balloon. However, I found that the random-look does not happen without some planning. I know, right? Planning randomness? Really? Based on what I observed, here might be some questions you can ask yourself or your kids as you construct these beautiful easter eggs. 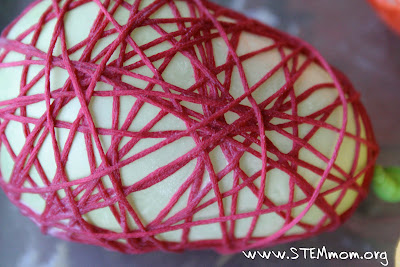 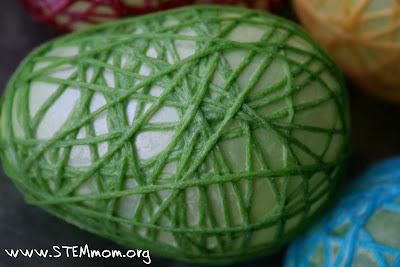 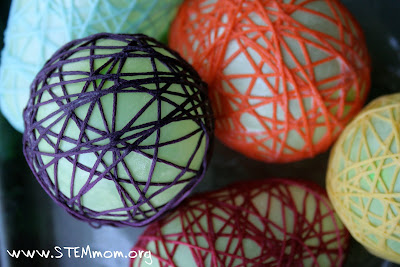 Here's my youngest getting into my photo shoot! 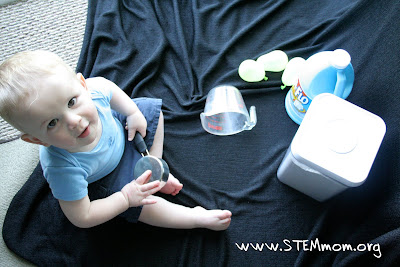