Q: What can you do with large marshmallows, paper towel cardboard, flour and a deep breath?
A: Make a marshmallow shooter! 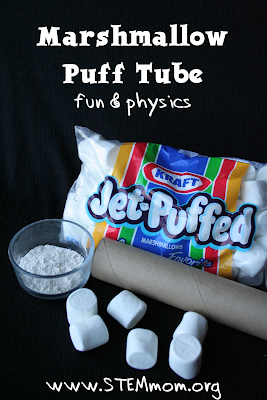 This is a physical science lab asks students to predict how far marshmallows will travel from:

Purpose of the lab: demonstrate the impact of unbalanced forces. 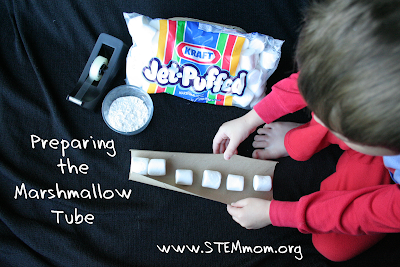 I did this labs with middle/high school students, than with my 5 year old son. In the handout I made, it says to use file folders, but if you toilet paper cardboard tubes, or paper towel cardboard tubes, they work much better. The file folders have a tendency to bend instead of roll, so the marshmallow doesn't fit snugly like it should.

The key to getting the tubes to shoot appropriately is the diameter of the tube. We found that lining up several floured marshmallows inside while you tape it shut really helps. If the tube is too tight, the marshmallow won't be able to move through the tube, but if its too loose, air will pass around the tube, and won't propel the marshmallow through. 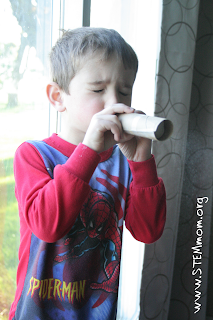 
December 2012: I have rewritten this lab to include two versions. The first is a commonly used version in which students follow directions, collect data, and answer post-lab questions. The second version of this lab is a higher-level inquiry lab, where students move through the scientific method with ideas they have about how to make a marshmallow fly further. If you are just starting to introduce students to using the scientific method (elementary-age) I would suggest using the first version. If you would like to reinforce scientific method vocabulary like constants, extraneous variables, and research design, you might try the inquiry version! Or if you are curious how students perform, use both with different groups of students. It would be a great action research study!

The purpose of this 5-page cookbook version is to demonstrate the concept of unbalanced forces. Using their breath, student move marshmallows through two different length tubes, and also test whether the location of the marshmallow (close to mouth or far from mouth) make a difference in how far the white fluffy sweetness can travel. Students tweak their tubes to have the "perfect" amount of friction and air pressure to make the marshmallow travel. Students record distances in inches (or cm) in a "Marshmallow Flight Data Table" along with a qualitative description of the flight. The Post Lab questions have students read about unbalanced forces, predict, based on the physics, which tubes should have performed the best, and then compare their actual data, with the expected data. Additional questions ask students to determine ways to "cheat" to make their marshmallow go further--which is my attempt at getting them to identify extraneous variables. Then they are to write a list of rules for a competition that would help make it "fair," which is how we address the "constants." Sneaky huh? There are a total of 6 post lab questions, and a revised data table comparing expected and actual results.

The second, inquiry version of the lab, students are provided the same materials as the first version, but not told what to do. The challenge is "Experiment with cardboard tubes to how far you can propel a marshmallow using only your breath." As the teacher you can limit the resources they have, or allow them to request additional materials. The heading in this inquiry lab include: Brainstorm, Playtime, Planning, Procedure, Experiment Analysis, Post Lab Questions. In this version, vocabulary of the scientific method are used and students design their experiment based on good research design. After brainstorming and planning (which includes a prediction) and writing out a procedure, they have this approved by you, before they can begin testing. The lab refers students to their lab notebook (which is separate from the handout), where they will record their data. One of the post lab questions asks them to explain the physics behind their marshmallow flight. No background reading is provided, so students will have to do this research on their own. 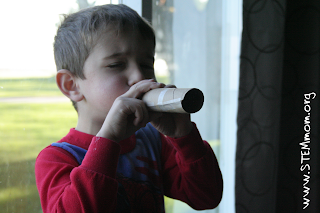 Note: My son didn't have the lung capacity to shoot the marshmallow through the paper towel tube, and barely through the toilet paper tube. Also, if you use flour to decrease the friction, it will make "puffs" when you shoot them, and flour marks on the floor! Don't do this on carpet! 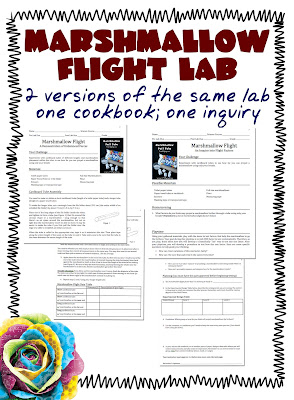