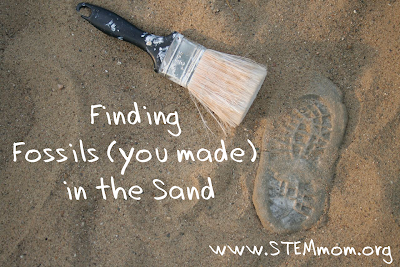 In my attempt to do a lab resembling earth science, this week in my middle school science lab, we did a "Footprint and Tracking" lab  This allowed me to play with various  "fossil" dough recipes, but more about that in a minute. Here is a link to the student lab handout.

I wrote the prelab section as a way to get students thinking about evidence and to make sure they understand the difference between observations and inferences. Observations are what we can record about what we see, hear, smell, touch, and taste. (Usually taste doesn't apply.) Inferences are how we interpret our observations. During discussion I give statements and have students guess if it is an observation or an inference. Then they are ready to study the graphic below. It shows 2 sets of footprints and they are to list ONLY observations. I encourage them to state the obvious, without providing any inferences.

So our list looked like this. (I labeled the larger prints as subject A; and the smaller prints as subject B.)
a) There are 2 sets of animal tracks.
b) Both sets of prints come from the North moving in a southward direction; the larger came from the northwest, the smaller from the northeast.
c) Subject's A's prints are further apart just before the 2 paths cross.
d) Subject's B's prints are further apart just after the 2 paths cross.
e) The subjects tracks overlap in the center and move around in a circular pattern.
f) Animal A's prints leave the scene in a southwestern direction.
g) Animal B's prints disappear.


The next prelab question asks students, "Is there information missing? What other observations would you like to have to better analyze what happened at the scene?" The point here is to make sure students understand that the prints are only ONE piece of data that might be left at a scene. And interpreting the footprints in isolation without looking at any other data will mostly likely lead to incorrect conclusions. Student answers usually include: Out deep the prints are in the soil/sand/mud? More about the environment, trees? bushes? Is there evidence of a struggle, like feathers, blood, or a carcass? When were each of the prints made; at the same time or at different times? The last prelab question asks students to tell a story of what they think happened based on their observations. 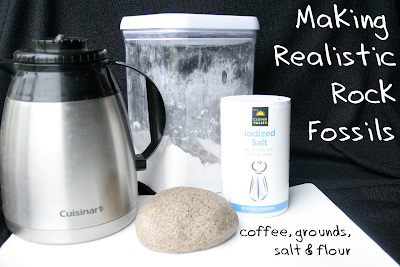 The hands-on portion of the lab is intended to allow students to play. Their task is "to figure out it is you can determine about a subject by studying its footprint." I set out a bunch of supplies and just let them play. My materials were:

Recipe for coffee dough: (I made mine the night before and kept it at room temperature. It was a little soupy, so I had flour for the students to knead into it.)

Mix all ingredients together, and knead extra flour into the mixture to give it a doughy texture. Press into pans and make fossil imprints. Can let air dry, or bake in an oven on 200 for 20-30 minutes. 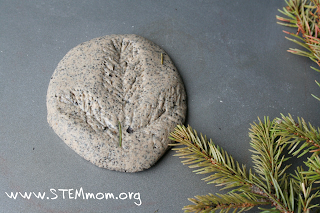 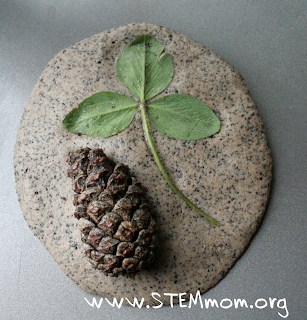 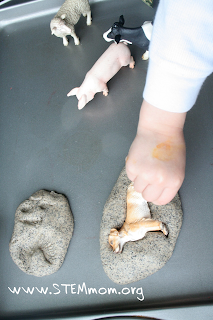 As you can see, I tried this at home with my son before having my middle school and high school science class do the experiment; that is how Lego guys got into the mix. 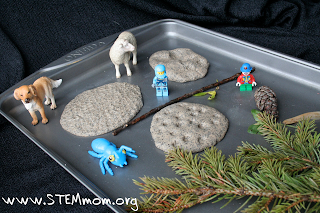 Before students got to play with the materials, they were to pick a characteristic of a track/footprint that they would want to test. For example, maybe they believed that they might be able to tell how much the subject weighs, or whether the subject was walking or running. Then they just pick one to test.


Watching the video below is not necessary for students to do the lab, and may actually decrease the amount of creative thinking they can come up with on their own. So I consider it more for your own background as you faciliate the lab experience. In this video they talk about the six levels of tracking, which I've listed below. These are "characteristics" that students may come up with to test in this lab. The video ends with a stern warning for amateur trackers regarding making incorrect conclusions. While we want to introduce our kids to tracking, we also want them to see that it includes skills and knowledge that only comes from experience! 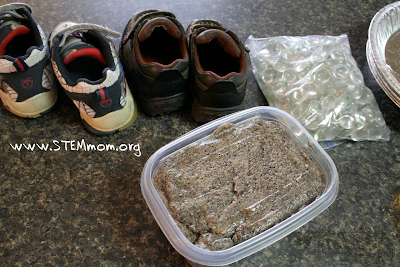 Because I have happen to have kids shoes, and I knew it would allow the student to use less dough, this was a great option. Plus, my older students got a kick out of how little feet of little kids are! In these photos, you can see the boys experimenting/playing with the clay and dough to see what characteristics of prints they can determine. 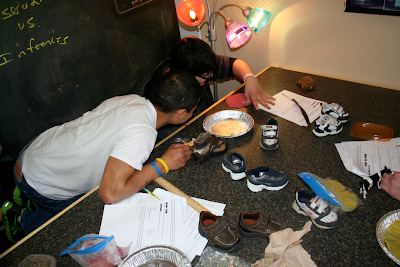 Because we were trying to do the lab within one class session, we didn't have time for our fossils to dry. Some who used clay added white glue to fill the cast, so they could get a full look at the foot impression later. Those who did put glue on the wet "coffee" fossil, did not get good results. The dough definitely needs to try before adding glue or paster of paris. 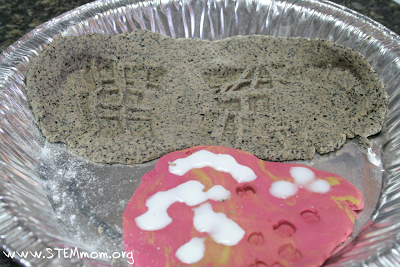 In the student handout, I emphasize the "playing" aspect of this lab and let the heavy writing aspect of the lab come afterwards. While the questions in the post lab are good questions, I'm afraid my students did a poor job and explaining what it was they did and why. While at first I was frustrated by this, I know that they need more practice. Most labs they have done in the past had a strict step-by-step procedure they were to follow. Not in this lab. I believe they did a good job of thinking for ways to find answers to their questions, just not describing it on paper. So we will work on this!


With the fossils I made with my son, we used lots of flour to make sure the boot didn't stick to the coffee dough. I like this dough, not only for the smell, but also for how it really looks like it was dried in a rock. 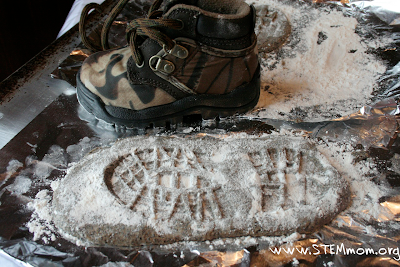 For the ones we made at home for fun, we baked in an oven for 20 minutes. The underside wasn't done, so we just laid it out to dry overnight. It still isn't rock-hard days later, but we we still had fun putting it in the sandbox so we could pretend we were excavating for fossils. We took turns back and forth, hiding the fossil and then finding it. The paintbrush was my attempt at making it seem more scientific, but my son preferred just to shove his hands into the sand to find the fossil. The gentle touch of a brush to preserve the integrity of the specimen, was a concept lost on my son. BUT we had fun! 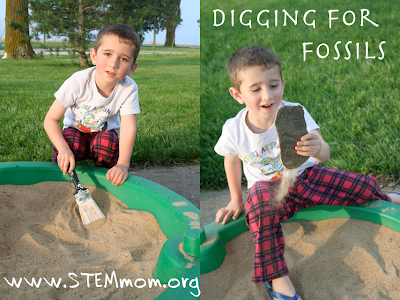 This ehow article describes how to make castings using plaster of paris while out on a hike.
Posted by Dr. Harland at Monday, May 07, 2012