Making observations sounds easy right? But did you know that observing something is more than just "looking" at it?

Think of it this way. Have you ever said to your husband or kids, "Do you hear me?" Of course they hear you, what you really mean is, "Do you understand the concepts I am communicating to you?" Making good observations is the same thing. You can look at something, but not really observe details or be able to recall them later.

Think of a time when you really observed something ordinary for the first time. Maybe it was a stick, a campfire, or a seed germinating. Hopefully REALLY observing something brings with it a sense of awe. Studying science for me is praise and worship of my wonderful creator. Nature constantly reminds me of the order and care that God put behind everything in the world around me. Beyond awe, you notice details. Shading of colors you never saw before.  Shapes that went unnoticed until then. Textures that before were overlooked. Odors that never registered. These are the best kinds of observations!

In the scientific sense, observations are facts/data that are collected, perceived, noticed, and then  recorded. 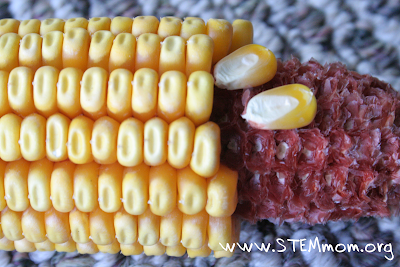 Data (I prefer the pronunciation "day-ta" over "daa-ta") comes in two forms; Quantitative and Qualitative.

For example in the seed corn cob in the photo above, you might choose a number of quantitative observations to make. For example you could:
Qualitative data on the other hand, are observations that you describe more what you see using "English-y" descriptions; such as: tall green leaves but turning brown near the base.

Here are a few examples: color, odor, texture, frailty, quality, or how it sounds.

In the seed corn cob in the photo above, you might choose a number of qualitative observations to make. For example you could: 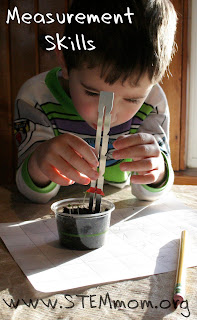 Accurately recording data is at the heart of every good experiment. It is crucially important because the conclusions made will be based on what is recorded.  There are several ways to record observations:

The old-school, traditional way scientists keep all their observations/data organized is in a laboratory notebook. However, many now will transfer the data into the digital arena such as spreadsheets to allow for a thorough analysis. Your students, no matter their age should be recording data carefully and in an organized manner.  (Post about my son measuring seedlings.)

There is something powerful about having students do their own lab drawings. It forces them to observe details they may miss otherwise. However, do not underestimate the power of the digital camera. I plan on doing more posts about this, but students can record digital images, video (and audio if that makes sense) for their laboratory notebooks. Allowing students to post their images to Flickr (or other photo sharing social network) allows them to share their results to a wider audience. And not only that, but photos can be labeled, and notes can be added right "on" the photo. Its pretty powerful stuff! Or they can tape photos to their lined paper. As long as they are recording what they observe. Text should ALWAYS accompany graphics.

No matter the age of your kids (or your age for that matter), there are ways to improve observation skills. You can support your student researcher in their observations by prompting with good questions.
Andrea over at No Doubt Learning has a wonderful post about using the scientific method with young kids. She lists questions parents can ask to prompt kids through the entire scientific research process.

What Comes From Our Observations

From careful observations we can make inferences.  Inferences are logical generalizations made from the data collected.  It is a "conclusion based on facts/data, that a person perceives to be true" (Harland 2011, pg. 28.)

Students often have a difficult time deciphering the difference between an objective observation--a fact that cannot be argued--and an inference. I like using the graphic below to help illustrate this point with students (I use this graphic in my Footprint lab.) Here is an example:

Observation: The larger prints are further apart just before the footprint paths cross. [This is a good observation. Everything is stated just as it is, without any assumptions about what is seen.]

Inference: The larger bird pounced on the smaller bird before they got into a fight.  [There are several problems with this inference. From the print, we don't know its a bird, we don't know that both animals were in that spot at the same time, and we don't know if they had a fight.]


Students can never have too much practice deciphering between fact and inference. A common problem I have with my student researchers is when I ask them to collect qualitative data, they write in their lab notebooks sentences like, "It looks healthy." WHAT? This is a terrible entry for an observation. Let me list the reasons why: 1) Healthy is a relative term, and depends on what it looked like in the beginning and on previous days. 2) It is a judgement call. What one person may say is healthy, another may not. 3) Students won't remember days/weeks later when they read their notes what they meant by "healthy." This is why I keep a close eye on lab notebooks early in the research process, to be sure statements like this are improved in future entries.  I ask them follow up questions such as, "What makes it look healthy to you?" "What color is it?" "Describe its texture." These questions get at the facts, and leave the inferences for later.

Inferences are at the heart of good science. HOWEVER, students should only make inferences at times they know they are doing so. I encourage kids to add inference columns in their data notebooks, next to the quant/qual data tables so they can be making inferences all along during their projects. Student MUST be able to separate observations from inferences!