Anyone who has kids or works with kids understands that not only does each have his/her own personality, but each also prefers to learn information in their own ways and also have preferences in how they share what they have learned. There are many different theories of learning styles out there, enough for everyone to find one they like best. For me it is the Multiple Intelligence theory. 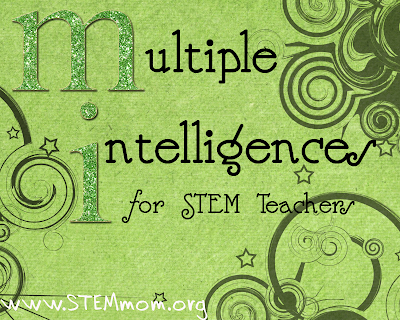 Since my early years in undergraduate education (back in the 1990's) I have been a fan of Howard Gardner's Multiple Intelligence (MI) Theory. Dr. Gardner's writings were not originally meant for the education community, and many educators find his writing a bit theoretical. However it is the educators who sat up and listened knowing he was on to something. Teachers like the MI theory as it explains learning styles in more detail than the commonly used learning style trilogy; auditory, visual, and kinesthetic.

As a young teacher, I had mostly freshman students and felt our first week of class time was best spent talking about learning styles, note-taking, and test-taking strategies. I myself learn best visually and didn't realize this until college. I wanted my students to figure out how they best learn, so that they could stop fighting themselves when it came using their study time most efficiently. For all 12 years that I was in public education, my students always learned about the MI theory of intelligence. More about how I integrated the MI theory in an upcoming article up.

I won't go into a lot of detail, but essentially the MI theory states that each individual perceives, processes, and describes what they learn in different ways. The MI theory has 9 categories;
But don't think of these categories as all-or -none. Rather, each person each possesses each of the 9 categories in varying amounts. During some phases of our lives we might be stronger in some but change to others as we mature. I believe our goal is to improve in all of the intelligences to help us to be more well rounded.

Teachers often teach the way they themselves learn. I am highly visual, and use a lot of graphics, drawings, stick figures, and tables when I teach. Early in my career I did it unintentionally, just thinking I was reaching more students this way. In reality, while focusing on visual, I was ignoring others. So in order to become a better teacher, learned to teach in ways which I was not entirely comfortable. For example, I do not like playing educational games as a way to review, as a bodily kinesthetic might enjoy, or using debate as the verbal individual might appreciate. But I learned to use a variety of teaching methods (tools) in order to reach as many kids as I could.

As STEM teachers, most of us have a strong slant toward the Logical/Mathematical, with varying other areas of strength. And the students who do well in our classes are also likely strongly logical/mathematical. Remember, we don't have problems reaching and teaching students who learn and think like ourselves. What we need to consider is how excite students who don't naturally gravitate to STEM subjects.  What can we be doing to help ALL students enjoy and see the value in STEM areas?

Consider Allowing Students to Share What They've Learned by:

Birmingham Grid For Learning: Has a a very good online MI survey for students to take. (Does not include the Existential intelligence) Students can save their code and refer to it later.

Printable Survey: This is very similar to what I give my students. The survey doesn't try and hide which questions are from which category, as they are grouped together. But still a valuable survey and easy to score, if you don't have access to an online version.


How do you keep your non-logical mathematical students engaged?


Thanks Tina for suggesting this resource!

This article is the first in a series about the Multiple Intelligence theory. You might want to check out the others!