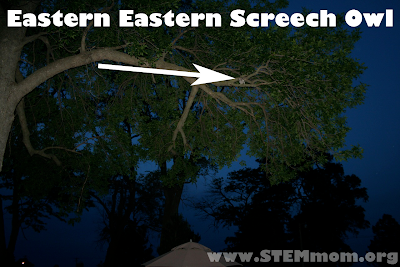 You're not going to believe this, but we have a family of Eastern Screech Owls hanging out in the trees around our home. My husband spends a lot of time sitting outside in the evening, and when he heard what sounded like a baby kitten crying, he found the noise coming from an owl perched on a low limb on the tree right above him. In the following weeks, we have identified a total of 7 owls, five of which appear to be baby owls. While we have captured some photos at night, I was also able to get some photos at dusk, with four of them perched close together. I dusted off my telephoto lense and got some decent photos! 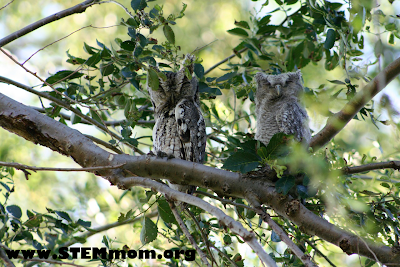 One of the counselors at the boarding school were we volunteer loves birds, and has identified these owls as Eastern Screech Owls. The Cornell Lab of Ornithology website has some wonderful information if you are interested. I will tell you that the "voice" recording on the Cornell page are  not the sounds our owls make. Ours sound more like kittens. Maybe these are the juveniles (babies), and their voices are still developing? Only a guess!

The juveniles are really cute. They are so fluffy, you can hardly tell whether their feathers are white, grey, or brown. They also have smaller ear tufts. While we assume that one of the adult owls is male and one is female, we have yet to figure out which is which. If you have any insight, please let me know! 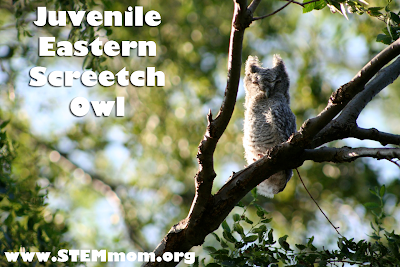 '
In the photo below, I caught the owls with their eyes open. the juvenile on the left is staring me down, and the adult (male?) on the right was scratching his beak with his claws. If you look carefully, you can see his mouth open and his claws up near his beak. 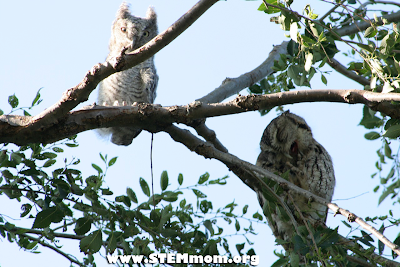 At dusk, the owls become very active, and create "chaos" in the canopy. Last night my husband watched the owls raid a robin's next. Needless to say, the robins were very vocal about this event! In the photo below, the owl on the left is our other adult. For some reason I'm guessing female, but this is not based on anything substantial. I like her feather pattern and her ear tufts are much larger than the other adult. The juvenile on the right is quite fluffy and larger than some of the others. 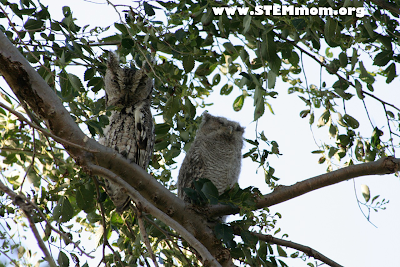 Imagine our luck to see the family hanging out on branches this close together. Since then, we've actually seen the 4 juveniles perched side by side. 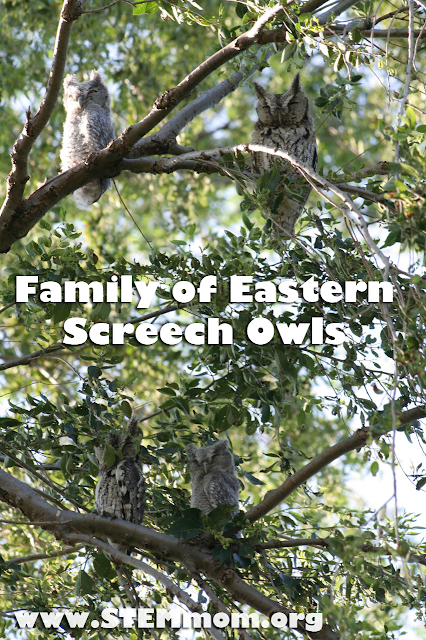 In addition to watching, and listening to the owls, I've also begun collecting owl pellets. Photos to come!) For those of you who don't know. Owls eat insects like moths, but also small animals like birds and mice. Their stomachs digest the muscles and guts, and then about 12 hours later, the owl regurgitates the bones and fur/feathers. This small mass, which my sons says looks more like "poop," is actually an owl pellet. 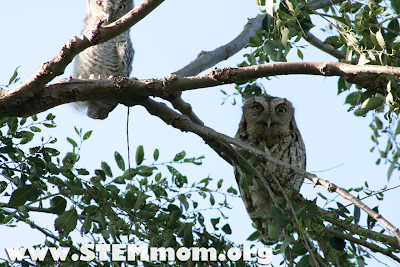 I have been wanting to do an owl pellet lab with the boys at the ranch, but buying them Carolina costs between $2-4 dollars each. Now I get them for free! Here is a video from the show Dirty Jobs: Owl Vomit. Its about how Owl Pellets are collected and sold! This is now what my son and I do in the evenings!