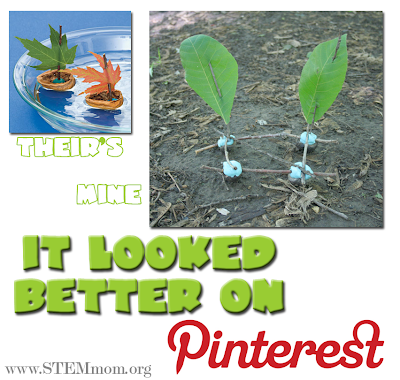 It looked better on Pinterest! I'm hoping that this is true for other people too. Some of the ideas I get from Pinterest...well, don't look like the pictures! 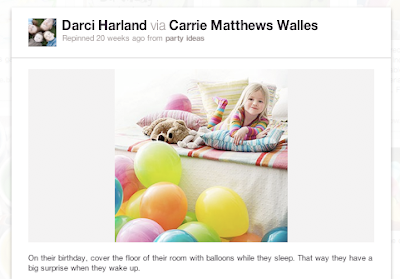 Exhibit A: I pinned this birthday idea from Parents.com to put balloons on the floor on your kid's birthday so that they'll wake up to a sea of color. Cool right? I mean really. Look how smiley that little girl is. I couldn't wait for my son's birthday to try this.

Then I also saw this photo from Secrets of a Super Mommy to cover the kiddo's doorway with streamers! Again, great idea, couldn't wait to implement it. (I knew I'd have to modify this one, because our Caleb shares his room with his 1 year old brother who doesn't always sleep through the night.) 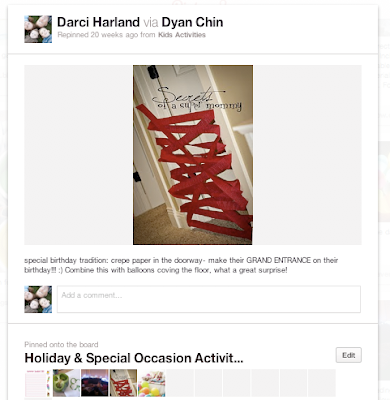 Reality check: Here's how the Pinterest-inspired special event went down in our home. I spent an hour blowing up balloons after the kids went to bed, I taped streamers between the bunk bed and the shelves, only to have a crying little boy at my bedside several hours later complaining of sore legs. (We think these are growing pains...I wouldn't know anything about that--I'm only 5'.) After I settled him down with hugs and kisses, he asked what all that stuff was in his room. I explained that for his birthday I wanted to do something special and decorated his room for him. He looked me square in the eye and said, "That was a bad idea, Mom." Humph. 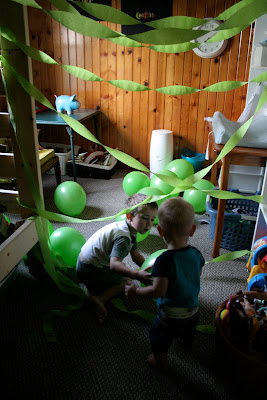 Exhibit B: And just today, I wanted to have something to do while on our nature walk, so I did a quick search on Pinterest and found this idea for making boats out of walnuts, clay, leaves, and sticks from Disney Family Fun Go site. The photo is enticing enough, right? Can't you just imagine your kids skipping along the shore, cheering on their handmade creations? Oh, I'm so excited, I'm giddy! 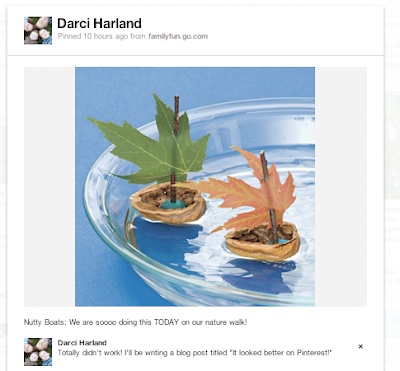 Let the substitutions of the original pin begin! Of course we had to make out boats outside, not in our kitchen like the article suggested! When I mentioned the idea to my son, he was all for it. Building boats to sail in the river? AWESOME! So I packed some homemade playdough (a Pinterest-inspired success) along with all of our other nature-walking gear, instead of the suggested clay!  I had all kinds of great ideas to make it a true STEM activity (of which I'll be posting later, pretending that this activity actually worked, which is how I suppose so many ideas get posted to Pinterest in the first place!...Making Nature Boats). 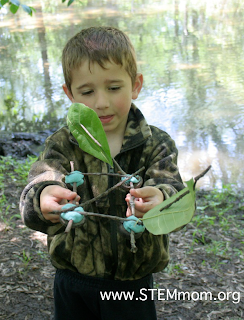 Reality Check: A single leaf, in a single nut shell did NOT work. It was too flimsy. So we (and by "we" of course I mean "I") improvised, as Caleb had lost interest by this point. We redesigned it to be more like a catamaran-style with 4 nuts, 2 leaves, and 5 sticks. (That sounds like the opening line to a  joke, but I digress.) 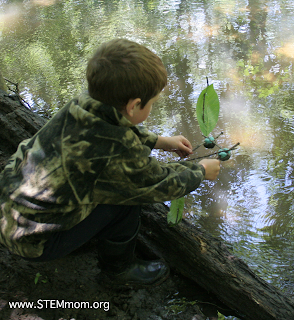 How did the boat perform you ask? In a nutshell (pun intended), not well. The leaf sails wouldn't stand up. I imagine the amount of materials I substituted was the reason for failure. I should have used clay, so the mast would be more sturdy, and could support the weight. And the type of nut shells we found were not walnuts, and didn't have a hallow enough hull to create an upright boat anyway!  In the photo above, one sail flopped before we got it in the water and in the photo below, the second sail bit the dust! Oh well. But on the cheery side of things, it did float! 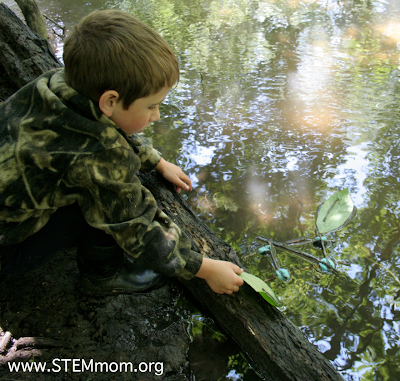 While I've had a number of Pinterest-inspired activities not work, I am still on board (another pun)! I love getting and sharing ideas of things to do with my kids! So if I get a couple of duds now and again, its still worth it!

What about you, will you join me in sharing a flop you had when implementing a Pinterest-Inspired idea?