So this week, after I put my 15 month old down for a nap, Caleb looked at me and said "Mom, what letters are we practicing today?" What a change this is from a kid who wouldn't even practice writing his name! And the reason is the Handwriting without Tears curriculum, the "Get Set for School" series. 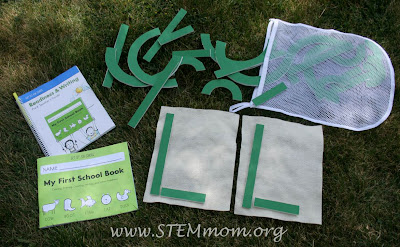 This is the very first curriculum I have bought, knowing that we will begin homeschooling kindergarten in the fall. Before researching handwriting curriculum, I knew NOTHING about teaching handwriting. My son had already begun learning handwriting in a preschool program where they were learning D'Neilian, but I knew I needed to find a learning system, not just a style that worked for us. What attracted me to "Get Set For School," is that it was designed by an occupational therapist and an early childhood teacher who took into account the physical abilities to young children as they begin writing. Everything they describe about teaching handwriting just made sense. They teach capital letters first because most of the letters are straight lines, and are least likely to get confused. The Get Set for School program only teaches capital letters and the wooden pieces all help drill in these concepts. A lot of though went into the order in which letters are introduced, is based on how the letter is formed. For example, the child learns the letters L, F, E, (and other like these) first because they start in the upper left-hand corner (by the smiley face) and have a straight line that goes down.

So I went ahead and bought the "My First School Book," the Teacher guide, and the large slate (not shown in photo above). I wasn't sure how the system would work for us, so I didn't buy the wooden letters instead I cut them out of foam using the template provided in the teacher's guide. (I store the letters in a lingerie laundry bag.) I explain this process in my post about the Mat Man...a must see, I video taped my son putting Mat Man together for the first time! Hilarious!)

If you are confident in teaching handwriting, you may not need the teacher guide, but I enjoyed having it. I'm a philosophical type, and like knowing the research and reasons behind the methods. The teacher guide provided this. Since I'm not confident as an early childhood teacher, I like having directions on exactly how to teach the letters. I now see the importance of talking about the line making out loud, where before I may not have thought to do that! 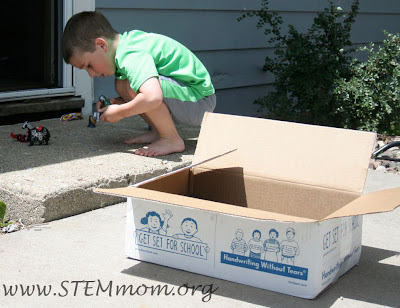 I also purchased additional used Handwriting Without Tears (HWT) materials, including the Stamp and See Screen and the slate. To say I was apprehensive about using a "slate" would be an understatement. I have a Ph.D. in educational technology, and I knew there were apps out there that could accomplish the same purpose in dexterity.  (HWT is actually coming up with an app for the ipad soon.) 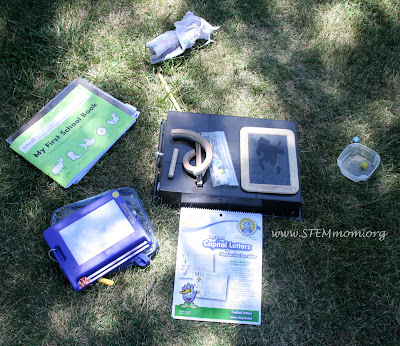 However, the beauty in the "slate" is  in the method they call "Wet, Dry, Try." It allows the child to physically experience the letter using several textures and different purposes. If you're not familiar with this, this is when the teacher uses the chalk to write the letter, describing the lines (long line, big curve etc..) outloud as the child watches. Then, the child takes the moist sponge, and erasing the letter using the proper technique. (I usually add a step where the child traces the wet lines with his finger). Then the child dries the slate with a little napkin, again using proper technique. Last, he gets to make the letter himself with chalk. So in just ONE attempt, they have felt the letter 3-4 ways! The HWT website has some great videos demonstrating this! 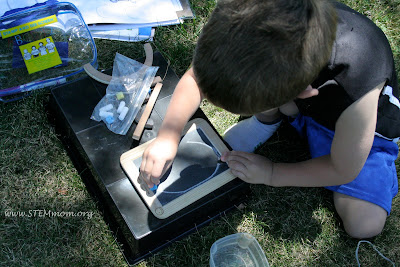 So the slate is a big hit! You'll notice at the top left hand corner of the slate is a smiley face. This is to remind the child that most of the letters start there. In addition to the slate, HWT also has the blue Stamp-and-See Screen. It includes wooden pieces (one long line, short line, big curve, and short curve) that have a magnet on the back. So it works like a magnadoodle. There is also a yellow hand held magnet for practice without the wooden pieces. My son LOVES this. It helps his letters look nice and straight and just like in the book. Lately, this is how we usually use HWT: 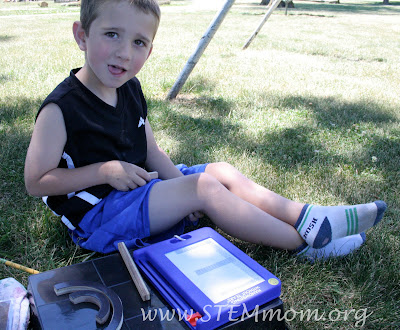 We have been real casual with school this summer, but handwriting is the one school thing we do almost everyday. And usually it is because Caleb asks to do it. I've already ordered the next book "Numbers and Letters for Me"which will get us into the lowercase letters,. I am glad we didn't purchase the wooden letters. They would be a good fit if you're using them in early pre-K (age 3-5) but the activities they suggest in the teacher guide were all too simple for my 5 year old. Essentially I retaught him capital letters using HWT and will do the same with the lowercase letters. On their website, I also downloaded and smaller version of a HWT "Print Letter and Number" poster. I was able to enlarge it enough to make it fit on two pieces of paper, but still get it through my laminator. I also laminated a single page version, but put into our handwriting notebook for easy reference!


I have a list of things I want to make (instead of buy) including double-line sentence strips, and gray box strips for practicing his name. I notice that when Caleb tries to write on paper, (with no lines, like signing a birthday card) his letters are all different sizes, and it slants up. Therefore, I think a good transition from the slate will be using the gray boxes to help him fill the spaces to make letters the correct size.  I will be sure to post all of the materials I create to share with you! 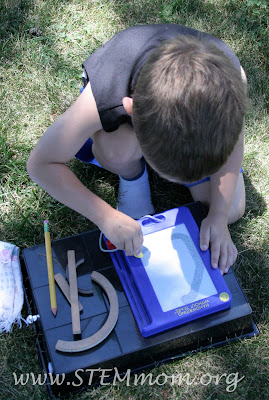 I will share with you, the length of time Caleb is interested in working on handwriting varies between 3-12 minutes. By no stretch of the imagination are we doing this for long periods of time. I'm so pleased that my first curricular choice was a successful one. It increased my confidence in our choice to homeschool. I am able to use what works for my kid, do it outside, inside a tent, upside down, late at night, early in the morning etc. Its amazing!  What are the strengths and weakness of the handwriting curriculum you use?
Posted by Dr. Harland at Saturday, August 04, 2012