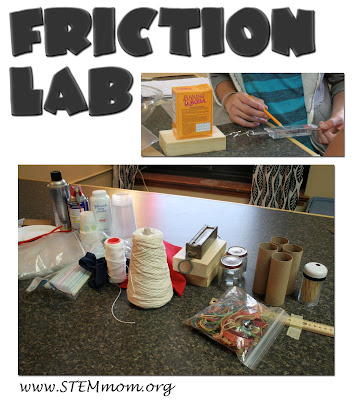 Friction is often a factor that comes up in our engineering labs as an extraneous variable that we need to address. Therefore, I decided to dedicate an entire lab to this topic. [The free student handout is available for download at the bottom of this post.]

Without tooting my own horn (beep-beep), I think I'm starting to get a handle on how to plan and implement this whole "higher-level inquiry" thing. (You may want to check out my post on What Inquiry is NOT, and also What is Inquiry?) When feasible, I've stopped writing procedures for students to follow. Instead, I place a wide variety of items on the table for students to see, and then start the lab with a question that leads into a brainstorming session about the topic. In this lab, it is "Is Friction Good or Bad?" Most students remember having to reduce friction in other labs (like in our wind turbine lab) in order to make an apparatus work more efficiently. 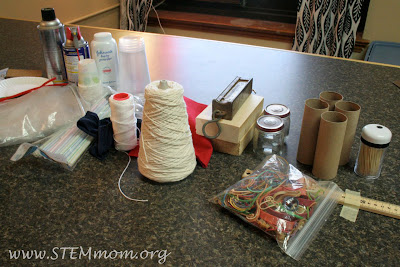 The Role of Materials in the Creative Process

Here are the materials I suggest having available for your students:


I'll admit that in my current teaching situation, I never have more than 6 boys at a time. Each group ranges in age and ability. I have some 12 year old boys in the same class with 17 year olds, and the 12 year old, may actually have higher thinking skills than a boy 5 years older. I've learned not to judge their' ability to think and construct apparatus to test their ideas! So,  doing higher-level inquiry labs with low numbers is not logistically an issue. I can empty my cabinets with supplies I anticipate them needing, and easily get more materials when they ask. I've toyed with the idea of NOT putting the materials out to make them think a bit harder about what they need. If you choose to do this, I suggest you introduce the lab one day, have them brainstorm what items they'll need and then give you a materials list.  That way you have time to consolidate the items they want, forcing them to think ahead. This idea would also work if you are homeschooling, except your kids will be able to help you locate the items, and then you can get started right away.

I have found that the boys need what I have decided to call "Play Time." This is when I just let them use the materials to start putting things together. Its during this play time, that they are figuring out the extraneous variables, what constants they'll need to control for, for I've chosen to have materials out for them to jump start the creative building process. After a short time of playing, they write their procedure and construct a data table for for the trials of their experiment.

Start with  a Friction Demonstration

The photo below shows an  apparatus I used to demonstrate a way to measure friction. I put 10 pennies in a plastic bag, and with twine, I tied it to a cardboard box that I made out of a toilet paper tube. (Have I mentioned that I have NO budget to run labs?) 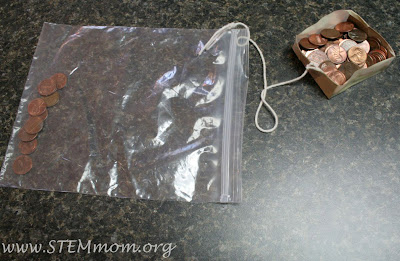 To set up the demonstration, I taped a meter stick to the counter and placed two different surfaces on either side of the meter stick.  In this case, the meter stick is used just to see whether or not the box moves, not how far it moves. 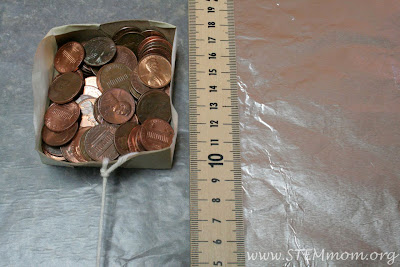 I allowed the baggie to fall over the edge, and notice the wax paper and foil go over the edge as well. When I demonstrated how my apparatus works, I started removing one penny at a time, and we all watched the box carefully to see when the box started to move or when it slipped. Then we counted how many pennies were in the box. There is a place in the student lab for them to record the demo data. In our case, the data is the number of pennies. We repeated the same test by doing a total of 3 trials. 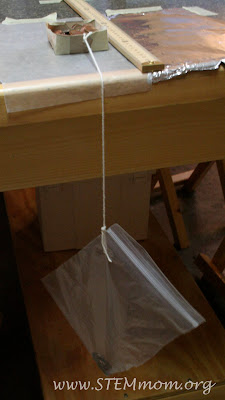 When we repeated the demo on the tin foil, and the regular table top.  I asked the boys to make any observations that they notice. They came up with several. One was that the location of the penny in the box seems to make a difference in how many pennies it takes. Another observation was that once the box started moving it moved quickly. They figured out that it takes more energy to overcome this "stopped" position, than to keep moving. So, this helped introduce a discussion of static friction and dynamic (or kinetic) friction. These terms are also discussed in the lab.  They figured out that I was comparing how much static friction each surface had. The more pennies left in the box, the less energy it takes to overcome static friction.

In the prelab questions, I have students think about ways to reduce friction. They came up with changing the surface (since we had just discussed that), but with more prodding, I wanted them to figure out that they can either add lubricants, or decrease the amount of surface area available for friction to occur.

Their challenge was to design a friction experiment. Students who wanted to test kinetic friction knew that they would probably measure distance an object travels, and those testing static friction how much weight it takes to overcome friction. I have them write their ideas in the table below. Then they must identify which variable they are testing. I find making them fill out this chart after they have had some "play time" but before they run their official trials is important. Student have a tendency to be testing several variables at the same time, so this chart helps you as you walk around the room, to see what they think they are testing versus what they actually are testing!


Students then make a hypothesis (actually its a prediction) of what will happen. They either predict which surface has the least amount of friction, or which items will reduce (or increase) friction the most.

While I decided not to have students calculate the coefficient of friction, depending on the level of your student, this could easily be added for higher level students. Here are some photos of what my students came up with.  As you can see some modeled theirs closely after mine, but others had completely original contraptions. 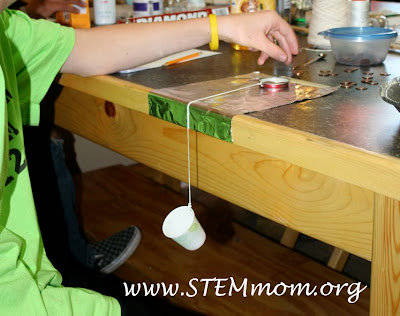 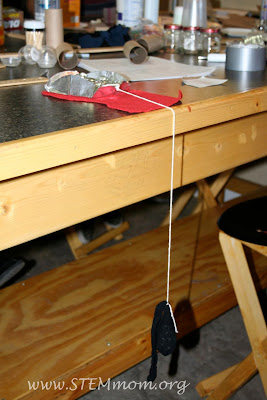 What I love about higher-level inquiry labs is watching the boys work, tinker, and problem solve. I encourage them to talk out loud and to share with others what they are doing and why. I absolutely do not let the boys laugh at another boy's experiment. I want them all to be comfortable failing. This is a constant struggle, but one worth the fight, right?

During our friction post lab discussion (usually the next class session), we talked about how prevalent the force of friction really is. The boys figure out that friction is NOT always the "bad" force, as friction is welcomed in situations like mall or pool floors.

In their post lab write-ups, I ask them to think about extraneous variables that may have influenced their results. They have a lot of problems with this, always wanting to say, Nope, I did great, I wouldn't change anything. Another question that really challenges them is, "Did your apparatus accurately measure friction? It takes me a long time to convince my boys that admitting that a procedure could be improved, doesn't mean you didn't do a good job, but they don't see it that way. So I'll keep trying.

Recently on the NSTA listserve  teachers, were sharing their class sizes, and I was horrified to hear that some have 35+. God bless the teachers who have those sorts of numbers and still have students do labs. I would imagine that allowing students to do higher-level inquiry labs would be a much bigger challenge. You have students all "doing their own thing" with no procedure to follow--a much more daunting task, not to mention the safety issues involved. I still believe it is the right thing to do, but you'd have to have students trained in safety protocol, and trust them a bit to do the right thing. 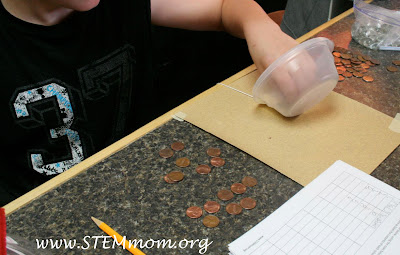 One of the reasons I like homeschooling is that inquiry is so naturally a part of how learning happens. When our kids show in interest in a topic we can study it, and can design experiments to test our ideas. While the lab I share here is best for middle and high school, I did perform a simplified version of this lab as an activity with my 5 year old son. It took less than 10 minutes, and we just used the apparatus I used for my demo. He predicted, and counted pennies, and we did only 1 trial per surface type. But it still was a good experience!

Here is the student version of the lab that I promised. 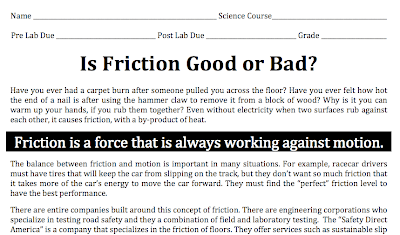 Free student handout for, "Is Friction Good or Bad?" Lab

What labs have you done that students have to design their own procedure?