Making a Mummy in Kindergarten 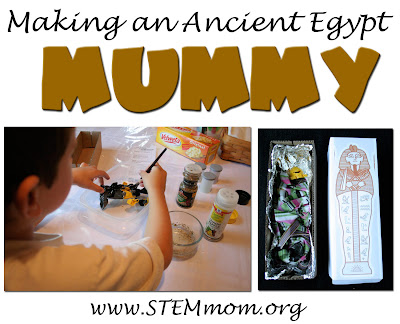 What can you do with a processed cheese food box, a large Lego Guy, strips of fabric, and a bottle of wine. Me? I helped my son make a mummy! Like many of you, I spend a lot of time on Pinterest getting ideas to supplement the concepts we are covering in kindergarten. Some of the ideas look better on Pinterest, and some unique ideas actually turn out!  Well, this is one of those things I threw together last minute, and I think we will both remember how a mummy is made. You probably have all of these materials already, so if you are doing a unit on Ancient Egypt, this may be up your alley! 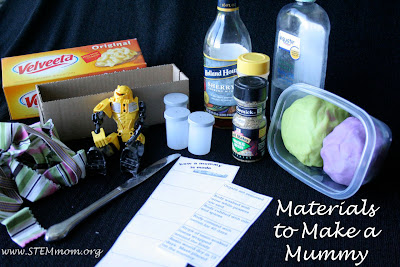 I used a handout I downloaded from the Homeschool Share Website. This is a great unit by Jodi Small. There are two versions of the "How a Mummy is Made" page, one where your child writes in the steps, and another one that your child can cut and paste. These are found on pages 27 & 28 of the 48 page-unit. Here are the various stages of making a mummy, and the materials we used to simulate the process of how ancient Egyptians preserved their newly dead Pharaohs.
A large Lego guy played the part of our dead Pharaoh. You'll notice he's missing his head...we did that so we could use it as the mask in the last step! We placed blobs of playdough to simulate organs, nottime to make the scientifically accurate. (Mom...remember he's 5...and his attention span wouldn't let me even put in the lobes of the lungs!) 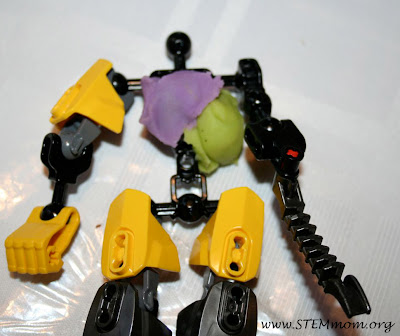 I gave Caleb a knife to "surgically" cut out the organs and place them into film canister containers (that I had to complete a alka seltzer rocket lab...I"ll share that lab later!)  These containers were our Canopic Jars. 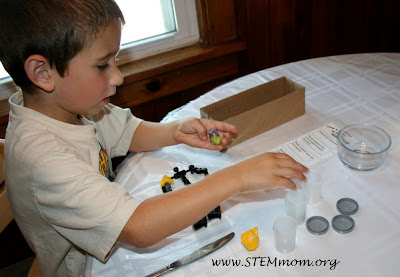 The next step was to wash the body in wine. So I put some cooking wine into a small bowl and he painted it carefully. I was surprised how careful he was to get every nook and cranny. 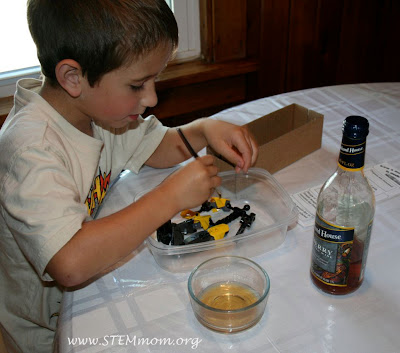 For next step we mixed baby oil (you could use any I'm sure) with some kitchen spices, and again just painted them on. This turned out to be quite the sensory experience! I taught my son to "waft" to smell strong odors. You'll notice I found a plastic bowl for him to work in to keep the table somewhat clean and dry. Next we counted to 40 to represent the 40 days the body sat and dried out. 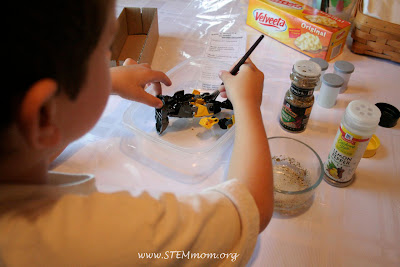 It was time to wrap him up. I had some nice white cotton I could have used, but I would have had to cut it all up, and I knew it didn't really matter. So you may recognize this fabric as the edging I used on a baby blanket I made a while back! Next we counted to 15, as it takes 15 days for the resin to dry. 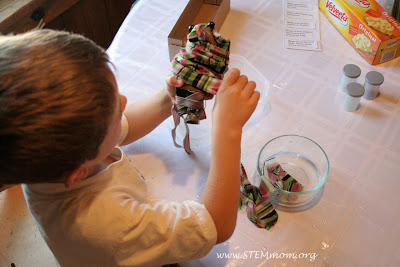 After we had the dead guy wrapped I realized that he was wet and would absolutely ruin the lovely cardboard sarcophagus we had planned for his final resting place. So I lined it in tin foil...or shall we say, "silver"? 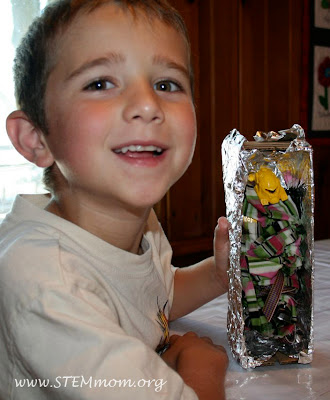 The last step was to put on the mask and to decorate the Velveta box so we could lay our Pharaoh to rest.  I snagged a graphic online, and cropped and printed it so it would fit our Sarcophagus. (Oh by the way, when you say this word with a 5 year old, you must say it, Sar-COUGH-agus...emphasizing the cough...not only makes it fun, but easy to remember!) 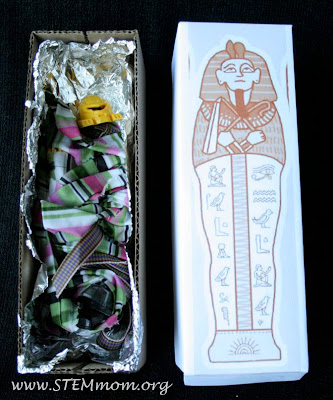 This activity was fun for both of us, and Caleb still knows what you do to a Pharaoh after he dies. My plan is to put the paper piece that list the mummy steps into a lapbook, with the photos of him performing each stage. I'll have to remember to pull out previous lapbooks as a way to review what we've learned in previous weeks.

What have you done in your study of ancient civilizations that went really well?