The view from our science window, we can see a landscape of newly erected wind turbines going up. So naturally, I had to incorporate that into our labs! I will admit that engineering is my weak area of STEM, but if I expect my students to be uncomfortable while learning, than so must I! After looking around for ideas, I decided to use WindWiseEducation.org resources, and ended up modifying three of their lessons, out of the extensive FREE lessons I had to choose from. You can see the entire list on their curriculum page.  While I whole-heartedly agree with high-level inquiry labs, I still struggle with having to "know it all" before I let kids learn on their own. If this is true of you too, you'll like this curriculum. Its give teachers just enough information make them confident, but not so much that we'll  "ruin" it for the kids!

I ended up doing a series of Wind Turbine lessons that lasted a total of four, 90 minute class periods. But there is enough curriculum to last an entire semester, if you are so lucky! I will talk about the first three class periods in this post and the 4th class session in another post about how we tested our turbines. 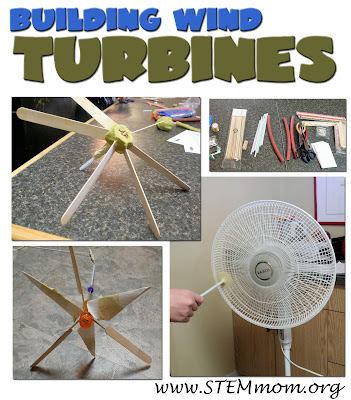 Session 1 and 2: Understanding Sources and Forms of Energy; How is Energy Converted to Electricity?


The goal of the first session was the introduce the idea of different forms of energy (radiant, thermal, mechanical, electrical are all forms) and sources (petroleum, coal, solar, wind). The goal of the second session was to have students better learn the differences between energy conversion and transfer and its importance to electricity generation. I got this lesson directly from Unit One: Lesson 1: Understanding Sources and Form of Energy. (I was actually working from the first edition, the 2nd edition is even better.) I think the focus on how energy is "lost" and how with each energy transfer and conversion the amount of energy we have to use becomes reduced is an important concept for us to grasp. I particularly like the graphic they have in the student handouts on page 17, to illustrate this point.

What I love about this curriculum is that it truly is inquiry. The (student) lesson does not start out with a narrative describing energy forms and sources. Students brainstorm these themselves, figuring out where their energy comes from and in what form!

For session 3 and 4, I used WindWise Unit 3, Lesson 8, "How does a Windmill Work?" but divided this lesson into two class session.

I forced myself NOT to begin the class by telling them how a wind turbine works.

When the boys walked into the classroom, they saw an assortment of materials out on the table including:

In addition to construction materials I also had a variety of other tools like hot glue, tape, poster tack, screwdrivers, garden hand shears, wire cutters, and scissors.

To get them thinking, I shared some photos of modern wind turbines as well as the "old fashioned" windmills used to power saw mills or to crush grain into flour.  We brainstormed the parts that might be needed, to construct a turbine ourselves, and I wrote their ideas on the board.

Me: What physical parts of a windmill modify the wind energy into kinetic energy?
Kids: The blades that turn.
Me: Good so you need to look at the materials and see what items might make good blades. What else do you need?
Kids: The blades need to connect to something.
Me: That’s right, we call that the hub. Since you might need to modify the blades, it helps if you have a way to easily change how the blades connect to the hub. Now that you have the blades and hub, you need a way to hold the blades in front of the fan to test whether or not the blades turn. Any ideas on what that structure may look like?
Kids: No, not really.
Me: That’s ok, you can figure that out after you’ve made the blades and hub.


Then I gave my students the following challenge:

Using the materials on the table, design a wind turbine with blades that turn. You have all class period.

Most looked at me like I was crazy. I told them it was possible, that if I could do it, so could they. I didn’t show them my prototype. Here is a photo of the one I constructed based on what I learned in the Windwise curriculum. I used index cards as my blades, attached them to a cork using straight pins, pushed a metal rod into the cork as my driveshaft, and then used a rubber hose on the outside. 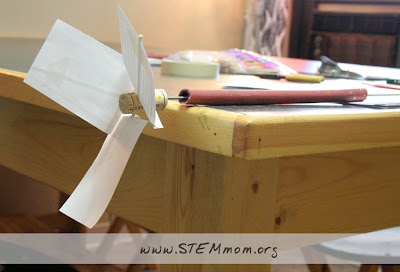 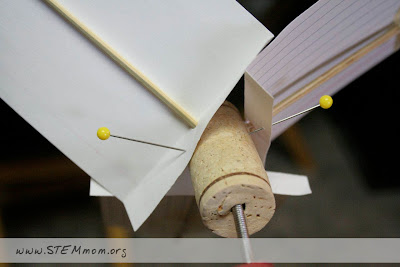 I didn’t give them any handout at the beginning of the lab, because I really wanted to get them to play with the materials and figure things out as they went. I did tell them they would have to explain what they did, including what they did that worked and how they improved their designs. But for now, they were to focus on the task. Later they would be asked to write stuff down. 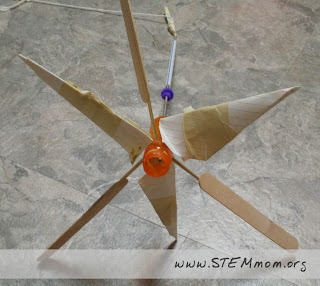 While some of the boys looked at me like I was crazy, and others wasted no time!  I considered it my job to keep them on task, and to get them talking about what they were doing and why. I moved around the room and peppered them with questions. Why did you choose that material? What is your plan next? 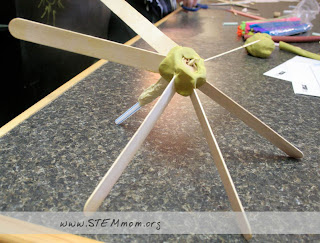 When the student was ready, they could head over the fan, to see if their turbine turned. Its usually at this time they realize that they can’t be holding the driveshaft (stick that is attached to the hub). They need to put the driveshaft into something that will allow it to rotate freely. I had straws for that purpose. They held the straw, while the blades rotated.  Many of the students had to go back and redesign their turbine. Few were able to get it to turn the first time. It was at this point students thought more about blade placement—either how close they were to each other, or the angle of each blade. 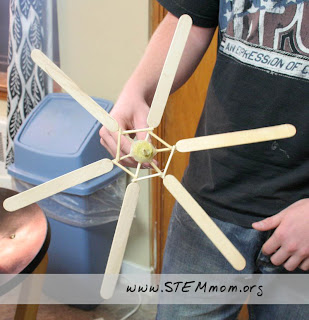 I did my very best not to tell them what to do. I just asked them questions, like, “What are you going to change in order to get the blades to turn?”  Often times, I also had to add in words of encouragement at this point, because they were frustrated with it not working right away. Take it as a learning moment, and letting them know this is how real science and engineering takes place. Trial and error, is real life, especially when using models! Now is the time to make mistakes, not when using expensive materials.

I did capture a few on video, just so you can see what it looks like, when they get the blades to turn.


I’m not kidding when I tell you that the boys cheered when the first turbine blades turned!  And while I encourage a bit of competition between the boys, they were also encouraging one another when it was their turn at the fan!

The next challenge was to have the boys test how much power their turbine could produce. I didn’t tell them about this until after they had met their first challenge. Once their turbine blades turned in the wind, I gave them the next challenge--to improve their design so the turbine can lift weight. I describe this 4th class session in another post titled Turbine post: Testing the Power of Turbines.


And while I did this lab with boys ranging in age from 12-17, I also went home and did the same lab with my 5 year old. I had to give a bit more guidance, but honestly, he did the construction on his own, with me asking questions that guided his thinking! 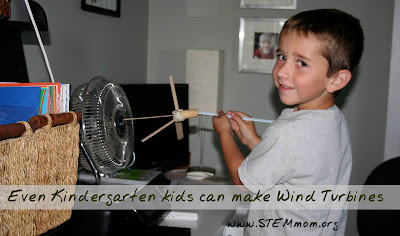 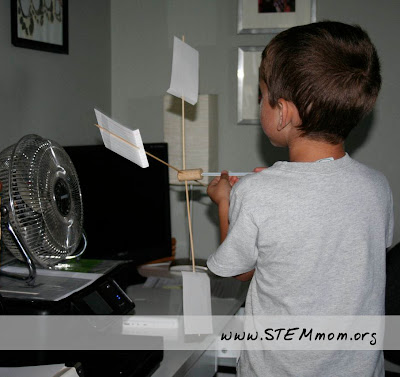 What have you had your kids build lately?