Its our second wormy Wednesday! Be sure to stop in to read the second week posts at No Doubt Learning and The Usual Mayhem. We've been having so much fun in our worm unit. We've been observing our worm jar each morning, and recording the number of worms we see, and the number of tunnels.  Then we eat breakfast. Weird I know, but I wouldn't have it any other way! Feel free to use our Worm Jar Observation Journal to keep track of your observations! 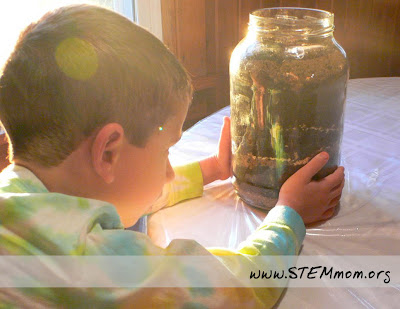 The next experiment in our Kindergarten Worm Unit is "Can Worms See Light?" My five year old, Caleb knew worms live in the dark; because we went on a worm hunt after dark, we dim the lights when observing the worms, we place black paper around our worm home, but he wasn't sure worms could sense light.  I don't think either of us were expecting the dramatic results that we got! 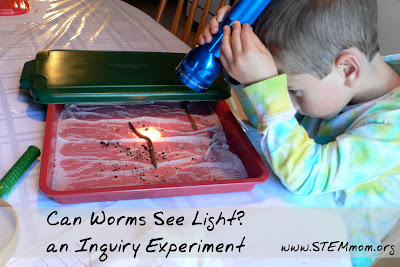 Here are the supplies you will need for the "Can Worms See Light?" experiment. 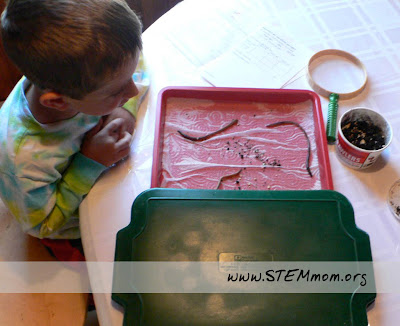 
Whenever possible, its best to just place the materials out for your child to view. Then begin the conversation with a series of questions.


Then, in their Science Lab Notebook (available as a free download at the bottom of this post), have them make a prediction,

I think worms like (circle one), bright light, dark, or I don't think worms can see light.

With the materials on the table see if you can get your child to figure out a way to test their prediction. Guide them when necessary, but allow them to try ideas even if they may not work. 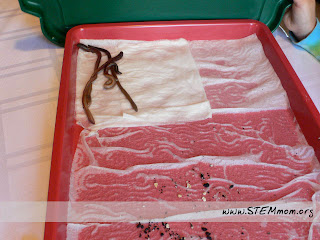 We lined the cookie sheet with wet paper towels (because we learned in our Wet/Dry experiment that worms prefer wet to dry towels). We then placed a green plastic lid to a 9 x 13 pan over one side of the cookie sheet and left the other half open. We then placed three worms on the open side, and waited to see if they moved toward the shade. They did! But to make them move even faster we shone a flashlight on them, and you should have seen how fast they crawled into the dark! Caleb thought it was a real hoot. He could even get the worms to turn left or right and go where we wanted depending on how he angled the light.

I was able to capture a few short videos to share our results with you! I think you'll be impressed with the dramatic results.

Our results? Worms do NOT like light! They prefer dark. All of the worms hurried into the corner furthest from the light and huddled together! We even had one crawl under the paper towel. Great environment for a worm, snug, moist, and dark! 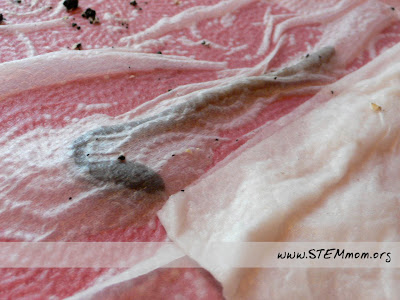 We recorded our results into our science notebook, and Caleb's final conclusion was that even though worms don't have eyes, they can sense light! Here he is completing his conclusion statement "Worms like "DARK" best."

Play nice! Don't experiment with the worms too long. Worms really don't like light, and we don't want to stress them out. 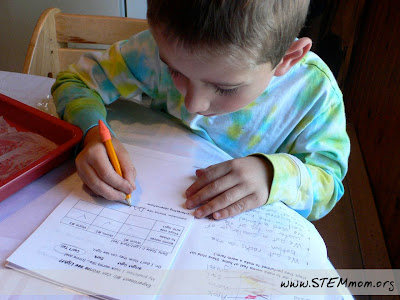 Our focus this past week has been the physical characteristics of worms, so I enlarged some images from the books we've been using (see No Doubt Learning and The Usual Mayhem for more information on the literacy aspect of our unit) and have had him point out features of what the worm looks like. 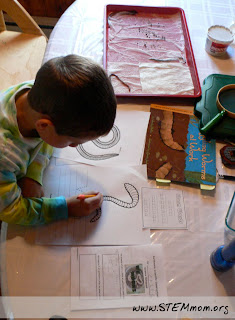 On a whim, we decided to use playdough to make worms. Caleb used a popsicle stick to make the "segments" on top, and he also marked up the sides to show their bristles (seate). And the photo above shows nicely, he even included the mouth, with the lip the worms uses to pull leaves down into its burrow! Not bad. The photo below also includes "castings" which of course is worm poop, and as any mother of a 5 year old boy will tell you, this has been a great topic in our unit! Note: The size of these playdough castings are not to scale! 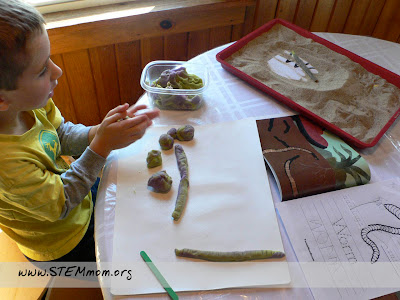 Another experiment you can do with your worm jar is to place small items at the top of the jar with the attempt to see how much the soil churns, or moves because of the presence of earthworms. We added 3 beans, a broken popsicle stick, bottle top, a lego piece (I'm pretty sure we've never done an experiment that didn't include legos somehow!) and two magnets.

Even after just a week, the magnets have completely disappeared under the soil line. The lighter materials have not. We will use a compass to determine the exact location of our magnets so we know how far into the soil they go! 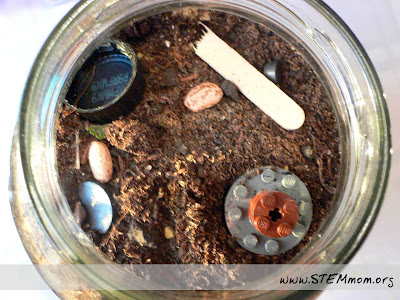 Here is the free student science lab notebook. The "Can Worms See Light?" experiment is Experiment #1 in our notebook.  I explain in detail how the science notebook can be organized and used as part of this unit in my introduction of observing earthworms. 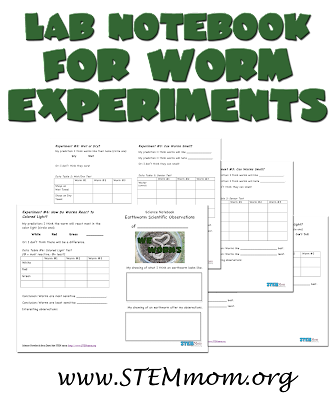 If you liked this worm experiment, you may enjoy the other earthworm ideas I've posted: You can click on the Worm Unit graphic in the sidebar or below. Or if you prefer, here are some quick links to the individual posts (with more still to come).
These experiments are part of a unit that I've been working on with Andrea over at No Doubt Learning, and Erin at The Usual Mayhem. So don't forget to go see what cool worm ideas they are highlighting to this extensive unit! 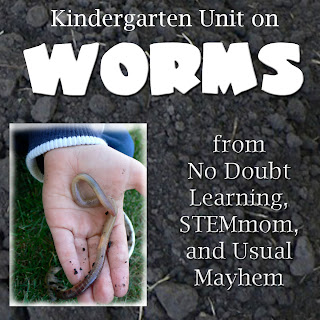 This post is being featured in the Playroom segment of the online magazine: