In December, I blogged about a chemo care package I put together for my 13 year-old niece, "Maggie" who has Hodgkins Lymphoma. In addition to the scarves, t-shirt caps, and cowboy hat that I put into her care package, I also found time to sew some more tailored head wraps as well.  I bought various types of fabric at a thrift store, ranging from polyester, cotton, and jersey.

I found this WONDERFUL tutorial at Daydream Believers. What I liked about this tutorial over others I found is that she included measurements for adults and for children.  This pattern is EASY. If you are careful to use only jersey (t-shirt type material), its even easier because you don't have to finish the edges, and has a nice clean look, like the purple and printed examples I have in the logo on the left.


I'll let you go to Daydream Believers to get the details but basically, the wrap is two rectangular pieces of fabric, a larger "scarf" and a smaller ribbed knit fabric for the band. You sew the lower band only a few inches onto the scarf, and then sew the remainder of the band to the top of the scarf. The rest of the scarf edge becomes the ties.

In retrospect, I probably needed to modify the wrap size to be something in between the adult and children's measurements provided in the tutorial.  If you are making a wrap for a teenager, you may want to consider this.  Since I cut all five of mine before I had sewn the first one, I had to modify what I had to make it work. I stitched using zig-zag stitches instead of straight stitches when attaching the band to the scarf. That allowed the band to have enough give to fit over Maggie's head. 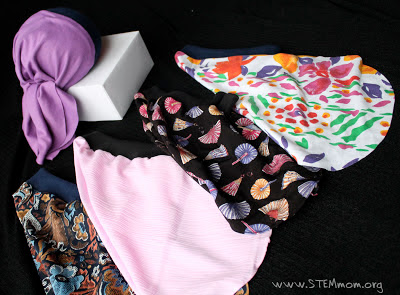 Another great aspect of this chemo wrap, is that you can modify it to match the look you are going for. Daydream Believers has some beautiful and classy examples that you must go and see. One way to modify the pattern is to make the scarf longer so the tied ends go down the back and feel like "hair." If you want to make the band feel like a headband, make the band wider so it can be folded up on itself. I made a total of five wraps, varying in colors, fabrics, and textures.

Once I got the hang of this, it was easy to make a bunch of them. If you are looking for a good cause to sew for, I would suggest making these and donating them to a children's hospital. There are also some great organizations that that distribute head coverings made by people like you. So, if this interests you, check out Halos of Hope, Crochet University Charity, or Head Huggers. Please consider the great tutorial at Daydream Believers as a type of chemo wrap to make! 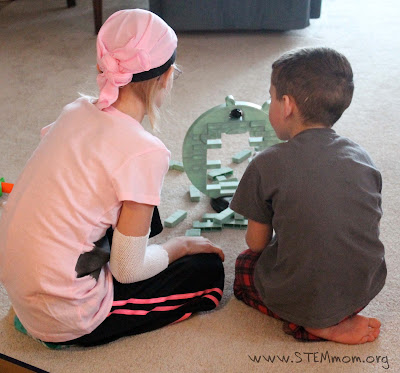 I linked up at Classy Clutter, and Thrifty Things Friday. If you are visiting from a linky party, let me know!
Posted by Dr. Harland at Saturday, January 05, 2013