Failure is Totally an Option!

Please, for the sake of our kids, take down your inspirational posters that read, "Failure is not an option" and replace them with posters that say:

Fail Early and Fail Often
Failure is Totally an Option
From Failure you Learn; from Success, Not so Much

We may have had it wrong. The infamous Apollo 13 quote "Failure is Not an Option" is a mantra that I believe, gives students the wrong impression about how problems are solved. In context of the movie, the engineers had a challenge unlike any that most ever have to face. They had limited supplies, limited time, and people's lives were at stake. Being wrong had devastating results.  So the quote in that context is inspiring. However, the real engineering design process, requires failure. And the sooner you fail, the quicker you learn. The more you fail, the faster you learn. 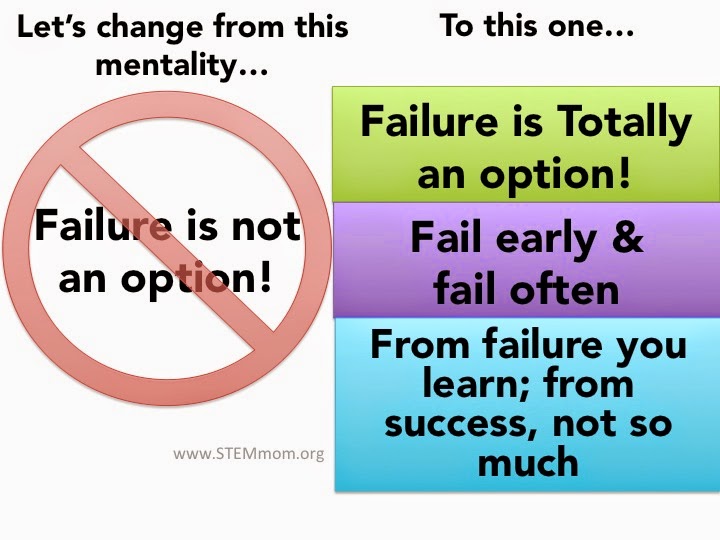 I'm nervous that the pervasive message that "failing is bad" had raised up a generation of kids who now won't take risks.  Our focus on standardized testing has exacerbated the problem. Look around you. Do you know kids who are scared to do try new things unless given explicit directions and guidance? Do you know any kids who love to tinker, taking things apart? What happened to try it and see what happens?


I was inspired by this article titled, Genius Hour; What kids learn from failure. Modeled after Google's 20% idea, middle school kids were given 80 minutes a week to work on any project of their choosing. Students meet with teachers to brainstorm, and students present and share their ideas. The standards of writing, listening, and communicating all come into play. But more powerfully, students learn to accept failure, and learn from it.


While leading a workshop recently, technology teacher Jarrod Rackauskas said he's learned that when facilitating project based learning, it is best if students fail early, rather than later. If teachers encourage students to tinker, think, develop prototypes, but wait too long to try them out, students are overly discouraged by their failure. But if they fail early, they are better able to see that failure helps them learn what's wrong, and how to fix it.


Avoiding failure is a mindset that is so engrained in students, it will take time to undo this type of thinking. I suggest we take baby steps. Watch the words you use when students are working on projects. For example, replace, "Better luck next time" with "Great, now what can you learn from this to make your next one better?"

Encourage students when they make a wrong prediction or when their prototypes don't work. In fact celebrate it! Give them kudos, give them a crown of failure.  Let them know failure is how you begin to do something great!
Posted by Dr. Harland at Monday, July 14, 2014 1 comment: